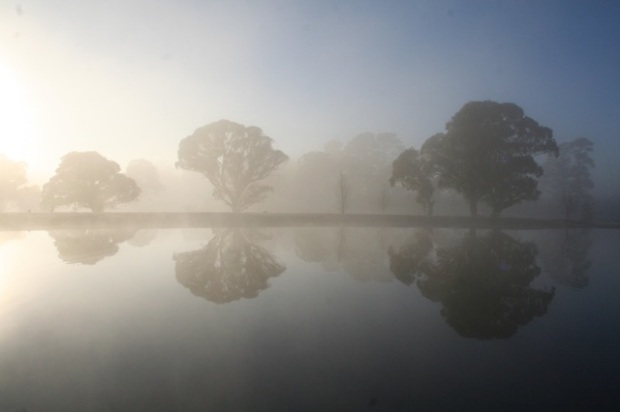 Our old farmhouse sits ‘in the round’ with 360 degree rural views.  We have no real front, back or side of house.  The garden and paddocks surround us on all sides. And one of the things I love most about it is that the kitchen spans the full width of the house and takes in the views to both the north and south.  So from my kitchen sink I can look out the window to see ducks and geese on the pond on one side, and on the other I see donkeys, newborn lambs and horses grazing.  On a super frosty morning like yesterday, it was all white on white wherever I looked. 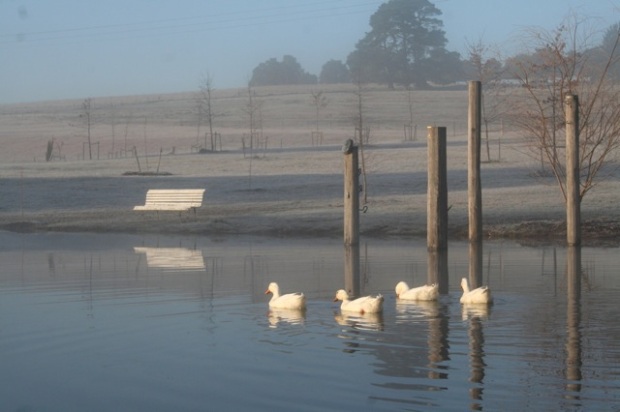 White goats in a white frosted paddock, white ducks on a glazed white pond, white geese snaking their way over white frozen lawns, the white trunks of the silver birches standing stark in the cold, leaden light and in the west as I walked over the crunchy grass to feed Pigley, I saw the white whisper of the round setting moon dropping slowly in the lightening sky. 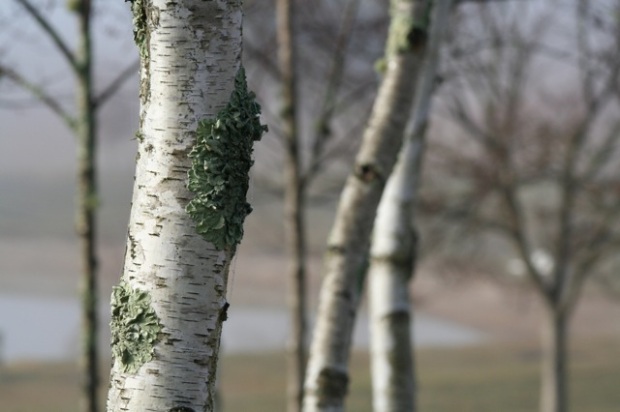 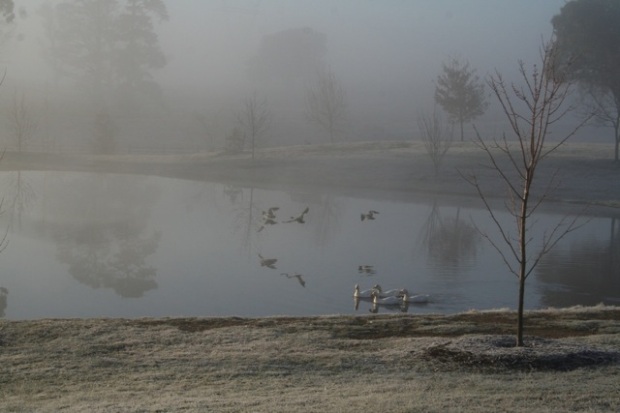 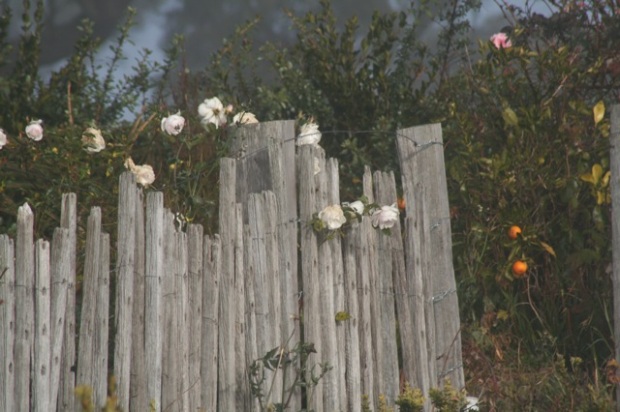 The remains of the iceberg roses, the white railings on the house and the white droplets on spiders webs made it all the more magical. 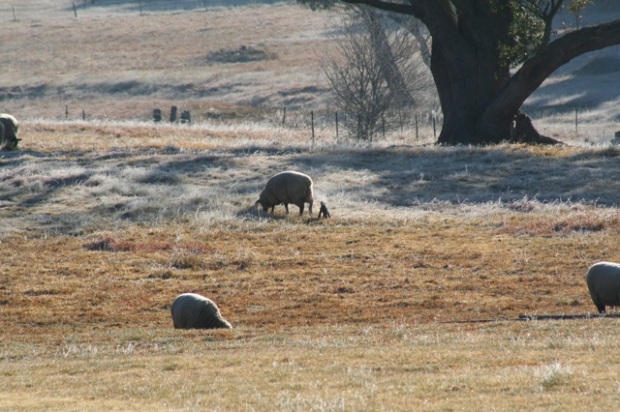 And looking out while I was making my morning coffee, I spotted this new lamb being born in the frosty light. 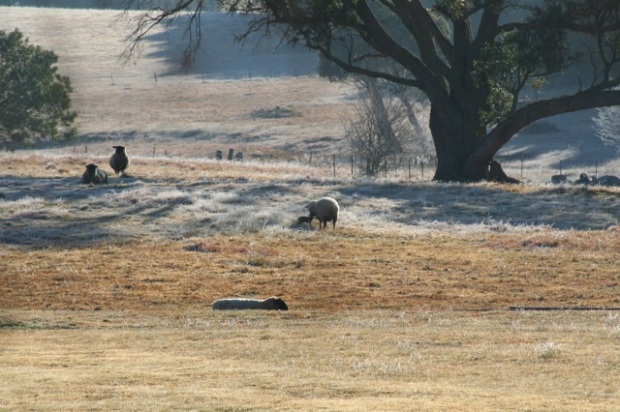 It all reminded me of the spectacular scenes we experienced as children growing up in Central Otago,  in the South Island of New Zealand. There we would have ‘hoar frosts‘ and the temperature wouldn’t rise above zero for days sometimes weeks on end. 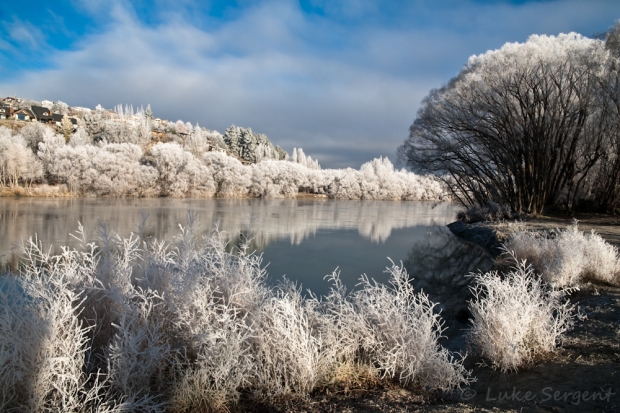 During these times the ponds would freeze over, the mesh on the tennis court at home would frost up completely to look like a white blanket, the power lines would gather layer upon layer of frost until they were so thick and heavy they would break.  This didn’t change things much in our daily life … we still rode our bikes to the bus stop in our long woollen socks and grey flannel shorts and pleated skirts with inverted rabbit skins on the handle bars to keep our hands from freezing.  And later going to High School in Alexandra our bus would drive down into the valley where the famous fruit orchards began and spanned for miles along fertile river flats up the Clutha River towards Cromwell and south to Roxburgh. During the winter the orchardists had to fight the frosts, in early days with smoke pots, then when these were banned for environmental reasons, the orchards were protected by sprinklers.  The frost would freeze the water on the baby buds and the temperature inside was warmer than the frost itself. Who would have thought!  Anyway, the reason for telling you this, is that as we drove down the hill toward the Manuherikia River, as Galloway Road branched off to our left, we would enter the orchard zone.  There in the early light, the entire view from the bus windows was of a crystal expanse of fruit trees completely covered in icicles and sparkling in the morning sunshine.  I loved it.  It was a wonderland. And while all the other kids were engrossed with schoolbus chatter, I was captivated by the loveliness of the glassy spectacle and imagined it as a ballroom filled with chandeliers. 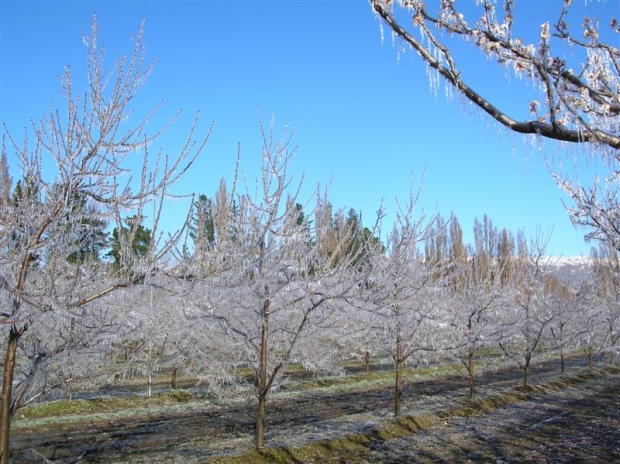 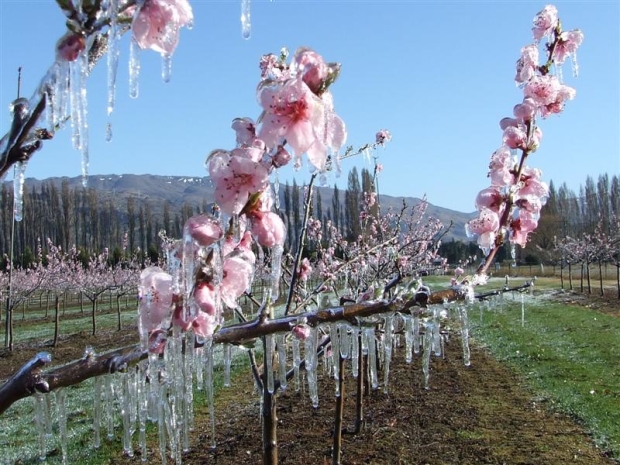 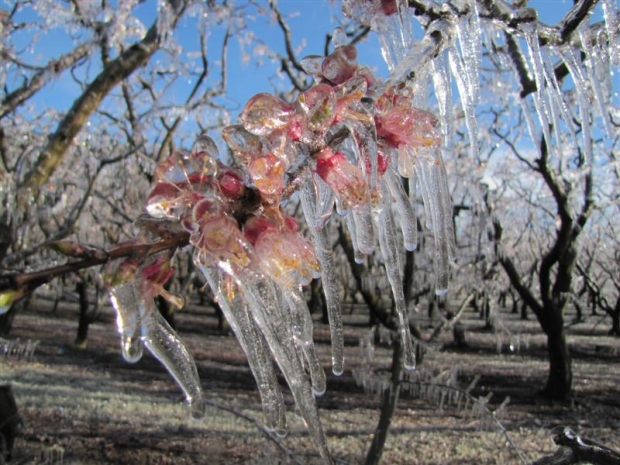 And as a small child I remember skating excursions to the Manorburn Dam where hundreds of people would skate over this huge frozen lake. 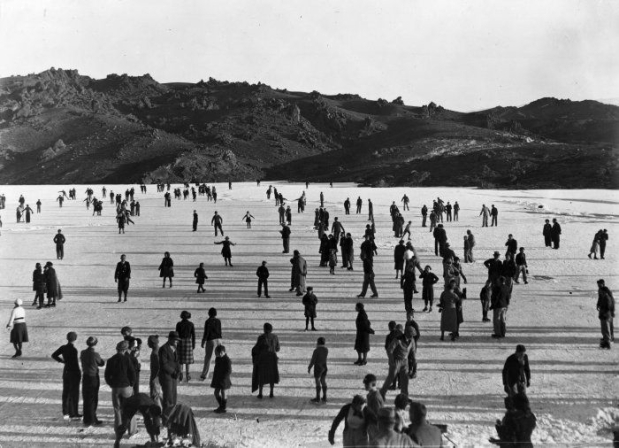 The music of Tom Jones would blare from the rickety speakers:

“I saw the light on the night that I passed by her window
I saw the flickering shadows of love on her blind
She was my woman
As she deceived me I watched and went out of my mind
My, my, my, Delilah
Why, why, why, Delilah”

… I would twirl and practice my spins to this music and then we would all stand in line in our skates on a rubber mat to order hot pies and hot chocolate.  Dance music would play and couples would waltz expertly on the huge arena. Curling rinks would be marked out and the huge granite curling stones would be hurled along as men swept furiously with brooms to speed the contest. Then from the control box we would hear warnings about too many people gathered in one area and we’d be instructed to disperse to spread the weight over the ice.  In a good year we would have ‘black ice’ where it froze so fast and hard there were no bubbles in it and it was like black glass.  You could see right through it.  And daring boys would ignore the “Thin Ice” warning signs and skate near the willows at the edge.  Those same boys are probably still skating on thin ice. Funny how I remember all the good things about growing up in such a cold climate, and never remember thinking about actually being cold!   This morning as I head out to check for new lambs, I wonder how yesterday’s tiny babies all survived another frosty night, snuggled closely in to their mothers woollen fleece … like little bugs in rugs!  I’m sure as soon as the sun’s up they’ll be leaping and playing like we did as children, oblivious to the cold of the frosty nights … just enjoying the sunny days that follow.  Whatever the temperature is where you are right now, enjoy your day. M x x x 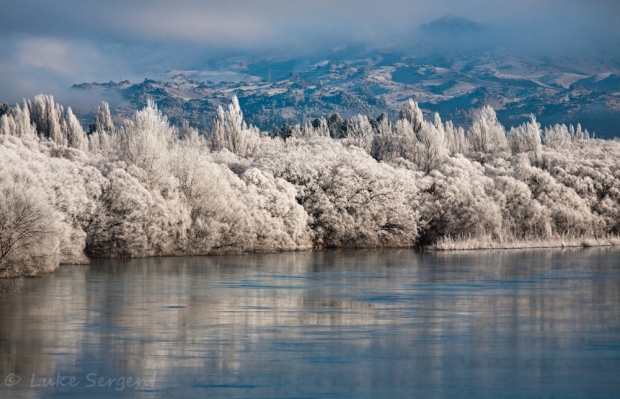 The images above of frozen orchards and Manorburn Dam skating are from Google.  And thanks to the super talented Luke Sergent for his beautiful images of Central Otago under hoar frost. 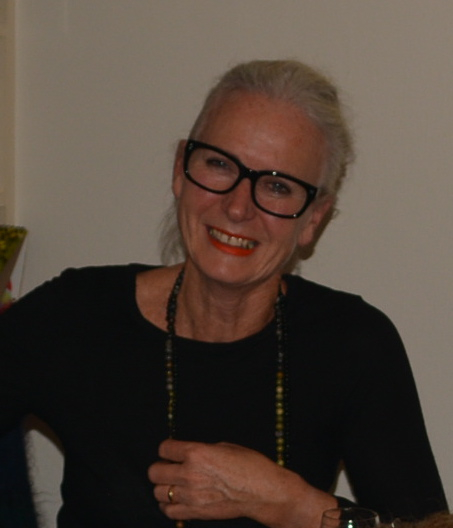 At The Potting Shed, we try and offer a really unique experience. We want you to feel as if you are visiting our garden, not our shop. We endeavour to source locally, wherever possible and to stock almost entirely vintage items ... so other than our range of Italian pots, and Italian firepits, you will find very few items that are mass produced. We have a wonderful location in an old loading dock, snuggled in the heart of the Dirty Janes Antiques Market where 70 little shops offer endless treasures for house and garden. We are also committed to supporting local artists and makers and so we proudly display pottery, metal work, handcrafted furniture, visual art and even willow sculptures that are produced by local artisans. We hope you will visit us when next you are in Bowral.
Happy gardening!
Maureen Gardner
P.S. Most of the photos on this site are my own - I'm very happy for you to share them, but if so, I would appreciate you crediting this site. Thank you. 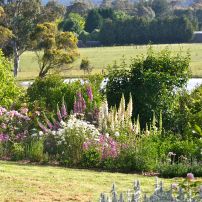 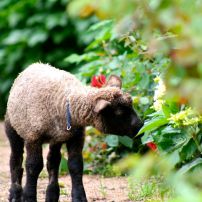 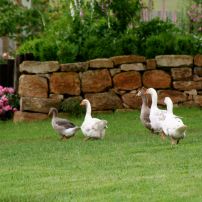 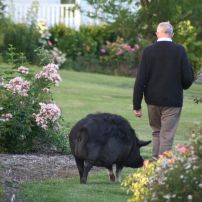 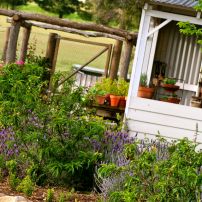 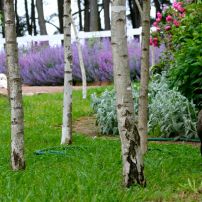 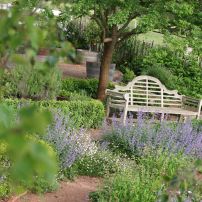 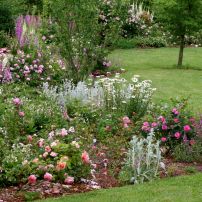 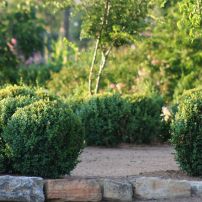 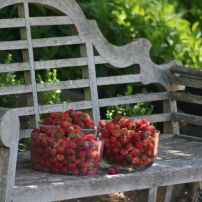 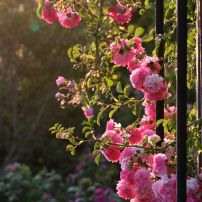 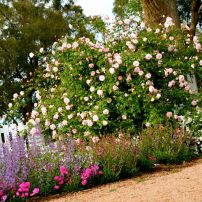 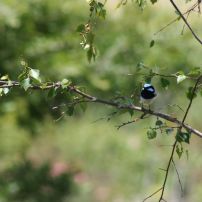 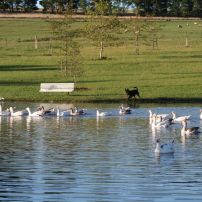 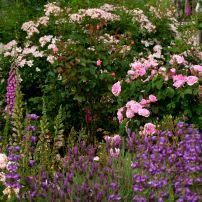